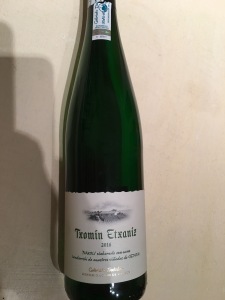 This month I have been trying to dedicate more time to understanding Spain’s wines and regions a bit better. Looking for something a little off centre I came across this lovely Txakoli (pronounced chak-o-lee), as recommended by the lads in The Corkscrew.

Txakoli is a light, fresh and slightly spritzy style of wine that has low alcohol – usually between 9.5-11.5% – and is made primarily in the Basque Country. This Txomin Etxaniz wine is from the DO – Denominacion de Origen – of Getaria, from within the Basque province of Gipuzkoa. There are three DO’s of Txakoli production within Spain – Getaria, Vizcaya and Alava. These are all very young DO’s with Getaria established in 1989, Vizcaya in 1994 and Alava in 2001. The grapes used for the wine come from a variety named Hondarrabi Zuri (Zuri means ‘white’ in Basque) and are generally grown on the coast as the ocean’s moderating effect on climate and rain help the grape to retain its trademark acidity, whilst still getting enough sun to ripen fully. While the grape used to produce this white Txakoli – Hondarrabi Zuri – represents about 95% of all the vines planted in Getaria, there is also a red variety planted named Hondarrabi Beltza, which is used to make rose Txakoli.

With the Getaria DO situated by the coast, it is no surprise that the wines are made to compliment the seafood that comes in abundance in the local area. If you’re ever in the local area and order a glass of Txakoli, you’ll find it served in glasses that look like small beer glasses with the wine poured from a height. This is to’ break’ the wine and release the CO2 allowing the flavour and aroma compounds of the wine to open up. It also adds a bit of theatre to the service.


Video of Txakoli being poured in San Sebastian

This Txomin Etxaniz is a great wine to open and pour over dinner or for group gatherings. It is a light and refreshing wine that offers flavours of pear, yellow apple with citrus and floral hints – think Vinho Verde or Muscadet. The wine has a lemon colour and is bone dry with high acidity that has a slight spritz that accentuates the acidity, rather than make it seem tart and harsh. In my opinion this is the perfect wine to serve with any seafood, especially something such as tuna, anchovies or cod. Super easy to drink and a definite crowd pleaser, I’ll be serving this at myself at a get together in a few weeks.

This site uses Akismet to reduce spam. Learn how your comment data is processed.